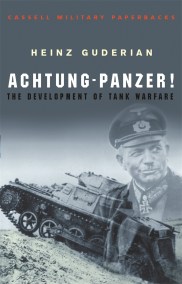 This is one of the most significant military books of the twentieth century. By an outstanding soldier of independent mind, it pushed forward the evolution…