I’d no desire to be a Mum until I realized I was running out of time. Soon the die would be irreversibly cast. Then, wham, I wanted a baby so badly I quite understood why desperate women steal them out of prams.

My husband had brought up three of his first wife’s children and he’d no desire for more. But we did a deal, we’d have one baby and, because we agreed he or she would need a sibling, we’d adopt another. Li-Da, a sixteen-month old war baby from Cambodia arrived when Daniel was just a year. And – sorry to be so soppy – they’ve been an unremitting (well, almost) joy ever since.

Sometimes I exploit them mercilessly. As a writer of family fiction, they are a constant source of inspiration. Or exploitation, they might say. One of my novels, Sisters, is largely about a couple who adopt a baby from Mozambique in the teeth of mad p.c. attitudes to cross-cultural adoption. I found it rather cathartic to write, as if I was getting back at all those holier-than-thou women who would rather see a child left motherless in a home than be adopted by a middle class white couple. I also relived the gremlins of panic that I might not love Li-Da as much as my home-made Daniel (unfounded, the bond was instant) and guilt about being a working mother and failing to be on the touch line or at the school carol concert.

My current trilogy, Food of Love, mercilessly continues the process of inspiration/exploitation. But how do you write with authenticity if you can’t mine your own experience? And happily, or deliberately, the Food of Love novels span the exact period of my own life, from the forties to now. The first book traces Laura’s story. It starts with wartime rationing and post war austerity and has as its background the changing nature of food and farming during and after the war. I can still remember ploughs pulled by horses, wheat standing in stooks, spam fritters and the sweet ration dispensed from massive jars. In London, my heroine works in a Lyons Corner House, and my hero, an Italian ex-prisoner of war, has a job in a greasy spoon at old Billingsgate fish market, both long gone venues that I remember well.

By Book Two, (not out till the autumn, but at last, thank God, delivered to Quercus) they have a small chain of Italian coffee shops and an ice cream business. And in the sixties they open an upmarket restaurant in Notting Hill, just as I did. And Angelica, heroine of Book Two and daughter of Book One’s Laura, spends a year in Paris, just as I did. And so on. In matters of food, of love, of loss, of family, a lot of my life gets weaved into the books.

The family still provide the best bits, both in fiction and in life, especially on annual celebrations. They provide such good opportunities for disaster or joy, for comic incidents or moments of extreme tension. Though I don’t hold out much hope for Mother’s Day. We are a rotten family for remembering birthdays – I even forget my grandchildren’s’ – so I don’t deserve or expect roses and soppy cards from anyone. But I look forward to Easter, where the whole tribe (three generations including a gaggle of grandchildren) will destroy my garden in search of hidden Easter eggs and flowers for the Easter Bonnet competition.

I’ll just love it, but will also be grateful when my children and nieces and nephews take their offspring home and we can slump in front of the telly, watch a boxed set of Downton and dream about the day when I could be watching Food of Love as a Sunday night saga. 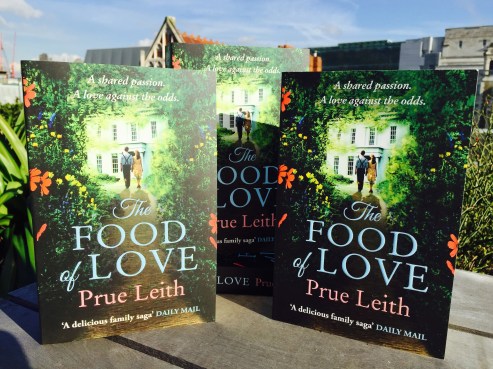 The paperback of Prue Leith’s Food of Love is just out, and the Trilogy has been optioned by Sprout Pictures and Parallel Film for a major TV series.

If you liked this post then why not catch up on…

What sisterhood means to Emma Hannigan