Cuba is hot, colourful and crazy. The people are warm, smiley and welcoming. And they love to party! When you visit Havana you hear music drifting from every bar and restaurant, you see musicians playing on every street corner and you see dancers salsa-ing on the cobbles outside Cabaret Tropicana. How could anyone resist the place? This is Cuba. And Cuba, as they say, is life.

I know from the start – and before I had the title! – that dancing would feature in this novel, so I spend time walking around music shops full of shiny hand-made maracas and drums, listening to the rhythms of the city, letting the music play in my head. The colour crashes the party too. It’s in the bright baroque facades of the restored colonial buildings, the blowsy street markets and the parrot greens, yellows and scarlets of the blindingly bright ‘out there’ clothes that the Cubans love to wear.

And then there are the hot pink Cadillacs . . . American Classic cars line the streets of Havana. I decide that one of my characters, Duardo, who fought with Che Guevara in the Cuban Revolution and now lives in Havana, will buy an American Classic car and start up his own tourist taxi business. So I start chatting to taxi drivers (and there are so many of them . . .). The most memorable is the driver who takes us back to our hotel in a sexy black Chevy with deafening speaker system blasting out some mind-blowing Cuban rhythms. We can’t see out of the windows which are covered with black plastic (needs must, apparently) and we stop to pick up several of his friends who squash happily in the back with us. When the engine stalls, the driver re-starts it with a machete and we all hoot with laughter. What else can he do? Spare parts are not available since the embargo following the Revolution. It is a small miracle there are any American cars left here at all.

This is Havana, so we have to follow Ernest Hemingway’s example of drinking a mojito in the most interesting watering holes in the city. There are a lot, and Ernest frequented them all. Our favourite is the bohemian La Bodeguita del Medio (literally ‘the shop in the middle of the street’, which was how it began) once frequented by artists, musicians and writers whose signatures on the walls bear evidence. Hemingway stayed at the Ambos Mundos Hotel, which has a roof top bar with magnificent views of the city. When we visit, a band of musicians are playing ‘Que será sera . . .’

But for Last Dance, I also need a more downtown feel. Tourism may be the lifeblood of Cuba but this isn’t a tourist trail. So we escape the tourist hotspots and wander the backstreets where houses haven’t been restored and hotels and museums don’t even exist. These areas are rough but real. There are derelict buildings, once grand perhaps but now housing extended families in crumbling apartments. There is poverty and there is decay. There are potholes, broken paving, rusty scaffolding, washing hanging on dilapidated wrought iron balconies. Downtown Havana is one huge restoration project waiting to happen. There is political graffiti everywhere; posters of Che and Fidel. For some, the Revolution lives on. And I want to write about these people too.

Back to the Malecon for sunset. It’s special – showing Havana’s long and sweeping promenade off in its best light. The Malecon is a place for lovers’ trysts (Ok, and prostitutes tout for business here too) where poets speak and musicians play. It’s romantic. Duardo and Elisa will have to meet here and sit on the wall looking out to sea as they dream of their future – everyone does. Classic cars cruise along by the seaside. The stately villas are evidence of Cuba’s past glamour. Neo-classicism meets art-nouveau and we get lucky – the wind picks up and massive waves crash over the sea wall, soaking us to the skin before we can run away.

The Cuban people are inspirational. Perhaps it’s the hardships that give them so much spirit. Cuban music and dancing exploded into my story. I return from Cuba and Last Dance In Havana has truly begun.

Rosanna Ley’s next sizzling read Last Dance in Havana is publishing 19 May, pre-order yours here 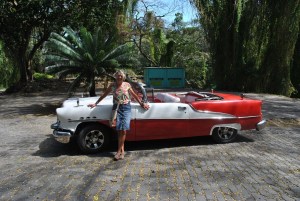 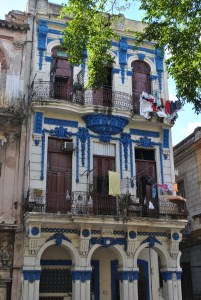 Emylia Hall’s Holiday Must Have