Just Boris: A Tale of Blond Ambition My WIP is partly inspired by my experience as a political correspondent for the Guardian so I’ve been consuming political memoirs and biographies: former minister Chris Mullin’s A View from the Foothills is also by my bed. Sonia Purnell doesn’t spare her punches as she outlines Boris Johnson’s arrogance, opportunism and ruthlessness in a great antidote to the image of Boris the endearing buffoon and showman. Recommended.

The Versions of Us, Laura Barnett I found so many parallels with my own life in this beautifully-written, tightly-constructed debut. Like her protagonist, Eva, I read English and became a journalist; I live just outside Cambridge; have a girl and boy; and, as a novelist am constantly thinking “what if?” I did find the second and third versions a little confusing at times but that didn’t matter: to me, the blurring of Jim’s different children and later partners didn’t detract from the central relationship between Eva and Jim and served to highlight the chance nature of events on which lives turn. Oh, and I cried at the end.

Sweet Caress, William Boyd Another novel I raced through, sweeping up this story of a full life lived against some of the most dramatic events of the last century. It was Amory Clay of the pre-Vietnam years I enjoyed the most: the photographer who captured the Blackshirt riots; the debauchery of Twenties Berlin; and who enjoyed Thirties New York. I was less convinced by the last 120 pages of the book and I was somewhat sceptical about this female narrator when she describes her lovers’ genitals. But otherwise this was immersive, convincing and enjoyable.

Tess of the D’Urbervilles, Thomas Hardy I re-read a lot of Hardy before writing The Farm at the Edge of the World, including Far From The Madding Crowd, The Return of the Native, A Pair of Blue Eyes and, of course, Tess. Hardy met his first wife, Emma, in north Cornwall and his poem At Castle Boterel (Boscastle) captures the sense of lost love and regret I wanted to infuse my book. Rereading Tess, I was struck not just by how modern it is – with its exposure of Victorian sexual double standards – but how lush and sensuous his nature writing is. Hardy also plays with lost opportunities and coincidence – as in The Versions of Us and as in my novel. At times they may seem extreme but it’s these tiny chance events, like a letter pushed under a doormat and not read, that lead to great moments of drama.

Life After Life, Kate Atkinson I’m a huge Kate Atkinson fan. When I struggled to get the prologue of my first novel, The Art of Baking Blind, quite right, I dipped into When Will There Be Good News? to see how she did it, then rewrote confidently and in a rush. I thought Life After Life and its sequel A God in Ruins were tremendous and I tried to learn from her Blitz scenes and from her approach to using historical research when writing The Farm at the Edge of the World. 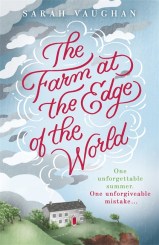 Waiting to be read: This Must Be The Place, Maggie O’Farrell. I loved The Vanishing Act of Esme Lennox and The Hand that First Held Mine in particular and have read nothing but good things about this.

Paradise Lodge, Nina Stibbe Nina very generously read a proof of The Art of Baking Blind after I tweeted her to say I’d loved Love, Nina. I’m hoping for more of her trademark deadpan humour, great dialogue and acute observation here. It’s my treat for finishing my next novel.

What Team Bookends are TRYING this year (see what we did there?)

Writing your life into fiction

Read the first chapter of TRYING, our new Book of the Month!