As the nights are drawing in closer, and the air is getting crisper, we’re finding any excuse we can to stay in of an evening, and plonk ourselves on the sofa with a blanket and a good book. Hibernation mode is truly starting to set in over at Bookends HQ, and luckily for us there’s a whole host of brilliant books publishing this winter that’ll keep us company!

One such book is the spectacular (both in size and scope) new novel from Stef Penney, UNDER A POLE STAR, an epic story of ambition, perseverance and love against the odds. Penney won the Costa Award in 2006 for her phenomenal debut The Tenderness of Wolves, and has now returned to the wild Arctic setting she brought so vividly to life. Under a Pole Star will publish on 03 November, but you can read an exclusive early chapter extract of this beautiful book here. 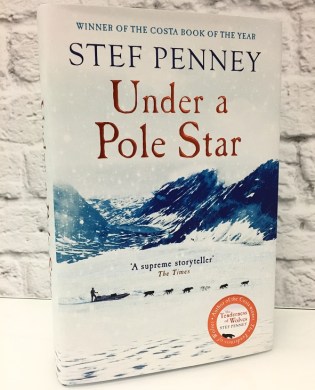 Flora Mackie first crossed the Arctic Circle at the age of twelve. In 1889, the whaler’s daughter from Dundee – dubbed by the press ‘The Snow Queen’ – sets out to become a scientist and explorer. She struggles to be taken seriously but determination and chance lead her back to northern Greenland at the head of a British expedition, despite the many who believe that a young woman has no place in this harsh world of men.

Geologist Jakob de Beyn was raised in Manhattan. Yearning for wider horizons, he joins a rival expedition, led by the furiously driven Lester Armitage.  When Jakob and Flora’s paths cross, it is a fateful meeting.

All three become obsessed with the north, a place where violent extremes exist side by side: perpetual night and endless day; frozen seas and coastal meadows; heroism and lies. Armitage’s ruthless desire to be the true leader of polar discovery takes him and his men on a mission whose tragic outcome will reverberate for years to come.

Set against the stark, timeless beauty of northern Greenland, and fin-de-siècle New York and London, Under a Pole Star is a compelling look at the dark side of the ‘golden age’ of exploration, a study of the corrosive power of ambition, and an epic, incendiary love story. It shows that sometimes you have to travel to the furthest edge of the world in order to find your true place in it.

Liked this post? Then why not catch up on…

Read an extract of Louise Lee’s A Girl Called Love

What Team Bookends are TRYING this year (see what we did there?)