International Women’s Day 2019 is on Friday 8th March and to mark this very special day, we interviewed Sheila O’Flanagan, author of The Hideaway.

Who is your favourite female character to have written and why?

Asking me to pick a favourite female character from all the ones I’ve written is a little like asking a parent to pick a favourite child. I love them all equally in different ways. Of the last few books I’ve written, one of the most satisfying stories to tell was that of Imogen in The Missing Wife. I’m really pleased that women are now speaking far more openly about coercive control and emotional abuse in relationships. It’s good that a wider conversation about this has begun too, and that we are more and more able to recognise gaslighting when it takes place. There’s still a belief in some places that only weaker people are gaslighted or emotionally abused, and with Imogen I was able to explore how this happens to women who are fundamentally strong too.

My most recent heroine, Juno (The Hideaway) is also a woman with inner strength but she has to separate herself from family and friends to rediscover it. It’s essential that women don’t feel like failures when something goes wrong in their lives; but we have a tendency to blame ourselves and ask ourselves what we did wrong, rather than accept that some things are not our fault. Juno’s story of recovery is another that was important to me to write.

Which female writers inspire you?

Today I am most inspired by women who write to give enjoyment and pleasure to the reader and who portray the female characters in their books as rounded people with their own aspirations and opinions. I’m a fan of Jodi Picoult, who tackles moral dilemmas in her work and gets to the heart of the problem with skill and humour; I love Joanne Harris’s mesmerising writing and complex characters; and I’m in awe of Cecilia Ahern, who allows fantasy and reality to collide in so many different ways in her writing.

What advice would you give to your 16-year-old self?

Believe in your own ability and don’t listen to people who insist there’s only one way to do anything. Realise that someone may be in a position of authority not because of their talent but because they were more confident and more assertive than others around them. Don’t settle for second best. (Also, buy Apple shares – Steve Jobs was a genius and you will use and love most of their products in your personal and professional life. If you buy a slice of the company now you won’t have to worry about the pension fund later on!)

Who is your favourite literary heroine and why?

The first character in literature that I totally identified with was Joey Bettany in the Chalet School series. I had bad asthma when I was young and I immediately bonded with Joey, whose ‘weak chest’, and constant colds and coughs, mirrored my own situation. When she was well, though, Joey was a tomboy, fearless, brave and occasionally recklessly silly (just like me). Even more than that, she wanted to be a writer, and by the end of the series of books she had achieved her dream. Never underestimate the importance of strong female characters in children’s books, and how they can help shape our lives.

Which writers are doing a great job of representing the female experience in their work?

I hope I do because it’s always been very important to me that women are represented as characters with multi-stranded lives. Family and relationships matter to us, but so do many other aspects of our lives. I think writers like Marian Keyes show this with the additional advantage of bringing humour to the mix. Holly Bourne’s YA and adult books brilliantly show the pressures that young women in particular are under today. And of course, the fantastic Margaret Atwood has always written believable, strong female characters – the fact that her most famous work, The Handmaid’s Tale, shows a dystopian future for women but is based on things that have happened and are still happening in real life should be a warning to us never to be complacent about the achievements we’ve made.

Sheila’s book, The Hideaway, is out in paperback now. You can buy it here. 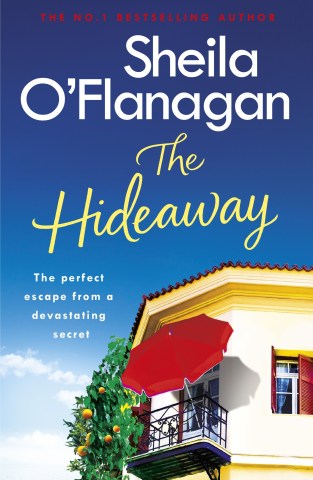 Exclusive sneak-peak of The Hideaway by Sheila O’Flanagan