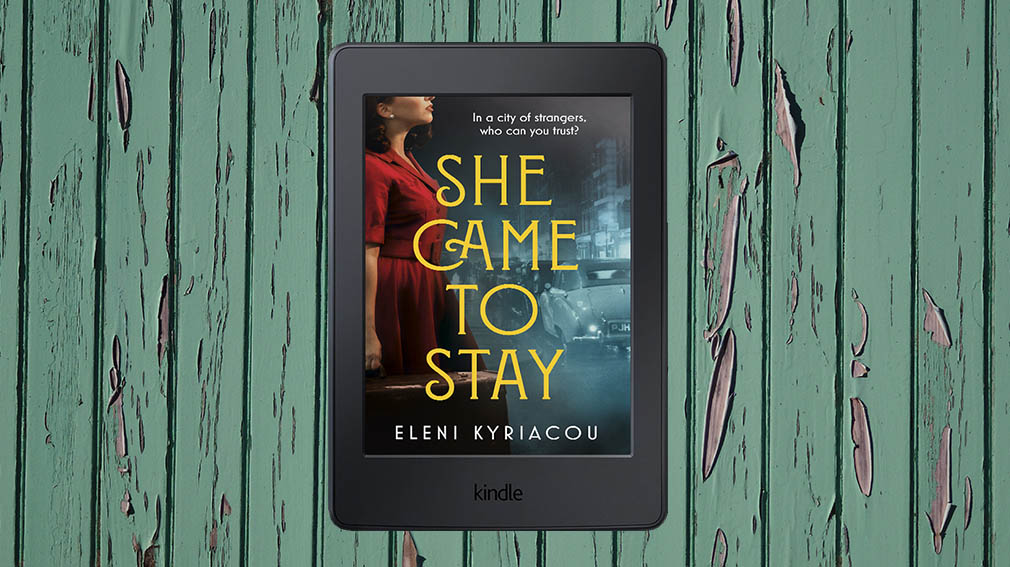 Why we love flawed female characters, by Eleni Kyriacou

When you read a book, where are you in the story? If I’m involved and enjoying it, I’m right there with the main character. As readers we want to live through the people on the page, and that’s why strong female characters can be so appealing. Both as a writer and a reader, I try see what the character’s seeing, feel what she’s feeling, and take every action alongside her. She might be hilarious, difficult, obstinate or highly principled – as long as she takes action and doesn’t hang around waiting for life to happen, then I’ll stay to witness what happens next. And, as we’re living through the people on the page, if they misbehave or do something we would never dare, even better!

When I started to write Dina and Bebba, the two Cypriot female characters in She Came To Stay, I naturally wanted to portray them as strong women.

Set in London in 1952, the story reflects the fixed notions about how women (especially immigrant women) were expected to behave. Dina is naïve, a bit gauche and has had a sheltered life. Bebba, on the other hand, is confident, looks like a movie star and knows her way around Soho. Despite their differences, both women see something in the other that appeals (I think that’s true of many great friendships). Dina craves the worldliness and confidence that seems to fizz off Bebba, whilst Bebba adores Dina’s innate optimism and uncomplicated take on life.

But life would be boring if we all stayed the same, wouldn’t it? If our friends knew exactly how we would react in certain situations? So I made sure both their personalities shifted and changed because – well, that’s what happens in real life. We change our minds, have misgivings, adapt to events, do about-turns. I wanted to show that they were flawed, too, because we all are. And that’s where it can get interesting, because what was once a strength can suddenly become a weakness and liability. For example, knowing what you want is often a good thing; not budging when life is screaming this isn’t going to work! is just pig-headed. Under pressure, you can either adapt or stay rigid.

Another reason I love changeable characters is because it’s much more exciting if we don’t know how someone is going to react (in fiction – but in real life, not so much). I wanted to highlight what happens when things go wrong – when the tension is turned up, when secrets are revealed and when the two women see each other for who they really are.

In She Came To Stay, the joyous, irreverent friendship between Dina and Bebba becomes claustrophobic and toxic as the story progresses. Dina’s innate optimism makes her trusting to a fault, and she leaves herself vulnerable to being deceived. And Bebba’s self-assurance and pride lead her to underestimating those around her. Rather than paint each woman as ‘strong’ or ‘weak’ I wanted to show that they were actually on a spectrum and (just like real people), were more subtle than that.

Every character needs faults and weaknesses. In fact, when reading and writing, I honestly don’t mind if a character isn’t ‘likeable’, but I do want them to be engaging and to show some emotions I can relate to, however briefly. Because that’s what makes them seem human to me.

And, should they then turn around and do something that takes me completely by surprise, well, that’s even better.

She Came To Stay is out now in hardback, audiobook and ebook.