I had never heard of trullos. I had never heard of Puglia. That is, until my brother and his wife invited us to their home there. My sister in law had had a long love affair with the area and had bought a small trullo years ago, with its own olive grove. Before this visit I was as green about Puglia, as the unripened olives on the trees, of which there are many, laid out like a patchwork blanket below you as the plane begins to descend over Brindisi in the heel of Italy’s boot.

Puglia is like Italy’s best kept secret and it’s not hard to see why.

When I first start to write a book, I like to find out about the place by discovering the food that’s grown, caught or made there and then let the food take you on a journey of discovery. In Puglia the olive trees grab you by the hand as soon as you land and pull you into their world. Olive trees, the fruit they bears, the oil they produce are the very building blocks, the foundations of this place.
One of the first things you notice, apart from the amount of olive groves everywhere, is the rich, terracotta red earth they grow in. Huge twisted trunks that have drawn their goodness from the ground over centuries. And then of course there’s the trullo houses, sitting in the middle of olive groves; white round stone buildings, with conical roofs. They look like Big Ears’ house in the children’s stories of Noddy; a house made from a toadstool on the outskirts of town. They are amazing. Cool on the inside in the intense heat of summer, with amazing roofs that make you feel you’re looking up into the inside of a gnome’s hat. You can’t help but admire the amazing workmanship and wonder how they do that!

We were staying in a trullo with a converted lamia, a domed roofed building, originally used for livestock. It was just round the corner from my brother. Behind its high stone walls, covered in wisteria, the gates drew back to reveal the white washed building, a large covered outdoor eating area, with a long table for all the family and a swimming pool. But it wasn’t just a rectangular pool, it had been built around an existing olive tree in the far corner, a walled semi-circle, accommodating the trees gnarled and far reaching roots. The olive was first here and to this day, comes first.
Already I was beginning to understand the importance of the olive tree. During the olive harvest when I returned to the area with my family, all the talk is of when to pick. And pick we did, until our fingers were purple and sore. In an area where nothing very much happens fast, during the harvest tractors, trucks and cars hurriedly make their way from the olive groves to the press because time is of the essence when it comes to the olive harvest. A good harvest is cause for celebration. And they love to celebrate, with friends, family, neighbours, good food; simple, rustic fayre, full of flavour, brought out by the olive oil, like fabulous lighting helping the star of the show to shine. And as the spotlight continued to shine during my time there, just like the new buds on the olive trees, after a winter’s break, the idea for The Olive Branch began to grow.

THE OLIVE BRANCH by Jo Thomas is new and out now  in paperback, and also available to download in ebook. 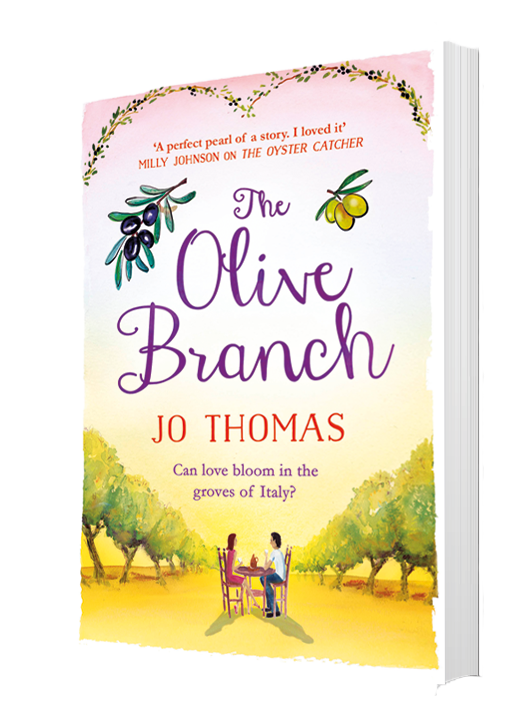 Liked this? Why not read all about the 7 reasons Natalie Meg Evans loves New York, or find out about  the Bookends Round The World Tour

How do you decorate your Christmas Tree?

Why Italy is all about Love

The books I’ll be giving this year…

How To Get Published, with Bookends and Marie Claire

Our authors share their most romantic moments ever (part 1)