Last week we unveiled its rather gorgeous jacket and now we’re going to show you a little bit of what’s underneath! *Twit twoo!* We got the sense a lot of you couldn’t wait to read the next e-short from Jo Thomas, so here’s a peek at the first few pages…

Layla gripped the simple ceramic urn tightly between her knees. But the more she gripped, the more it slipped and slid against her thick woollen tights, threatening to spill over onto the immaculate leather interior of Rob’s car.

‘Watch the leather!’ he said, holding the steering wheel with one hand and changing the music on his phone with the other.

His car. His pride and joy; for now anyway, until he upgrades, which Layla was sure would be any time soon.

As sales agents at Cadwallader’s call centre where they both worked, you were encouraged to focus on your goals. So much so, in fact, that you had to put a photo of the thing you most aspired to up as your screen saver, so you knew what you were aiming for. Layla’s had a wedding scene from Harper Magazine with the most amazing wedding dress in it. Rob’s had his next car. Much the same as the one they were in, but newer. Layla’s best friend Emmy couldn’t see the point of Rob upgrading his car. But then, Emmy didn’t even drive.

Layla put one hand on the lid of the urn and lifted the other up to shield her eyes against the brilliant orange sunlight that was dazzling her. Her new shiny solitaire ring spun on her finger. The sunlight was so low and bright she felt like she was being spun this way and that, inside a tumble dryer; not being able to see or get her bearings.

‘You must be able to work out where we are now!’ Rob said with irritation as he swung the BMW up the high street, claiming the right of way for oncoming drivers.

‘I don’t,’ Layla said, wishing she did. Her hand was still held up in front of her eyes, the other on the slipping urn. Her knees, thighs and buttocks began to ache with the effort of keeping it there. ‘It’s been twenty years since I was here!’ she reminded him. She’d been twelve, just three weeks away from her thirteenth birthday when she’d last visited Swn-y-Mor — the small fishing village nestled into a harbour that wrapped itself around an inlet on the edge of the Atlantic on the West Wales coast.

‘Try the satnav again,’ Rob insisted, pointing to her phone.

Layla didn’t have a spare hand. If she dropped the one in front of her eyes, she’d be blinded. If she took the one off the urn … they’d be breathing in ashes, her dad’s ashes to be precise. Not that she’d seen her dad to call him that in years. But still, it wouldn’t be right.

Her neatly straightened blond hair flicked around her face catching in the fabric of her pastel pink cashmere scarf, which contrasted with the pale blue of her eyes. She was wearing a short tweed skirt and smart white fitted shirt under her showerproof short coat, and wished she’d slipped a thin woollen jumper under her matching waist-length jacket.

Rob tutted, then indicated at the last minute, taking a sharp right-hand turn in front of another car that stopped, the driver shaking his head at Layla as his bonnet practically met her passenger door. The jet-ski they were towing behind them wobbled from side to side but stayed put on its trailer as Rob put his foot down on the accelerator and they sped down the tight lane, flanked by tiny fisherman’s cottages built on the slope of the hill.

Liked this? Why not read…

A free extract from Tasmina Perry’s THE LAST KISS GOODBYE

Or take a look at MY EVERYTHING by Katie Marsh

Read an exclusive extract from Coming Home to Winter Island, the new novel by Jo Thomas! 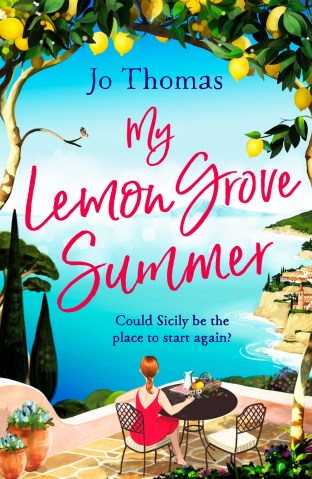 A Winter Beneath the Stars – Jo Thomas | Friends of Bookends Reviews

Who’s the trickiest person to buy for on your Christmas list? Graham Norton, Joanna Bolouri, Jo Thomas and Joanna Nell fill us in!