We’re thrilled to reveal the cover of bestselling historical fiction author Marina Fiorato’s next novel Crimson and Bone, which Hodder & Stoughton are publishing in April next year. 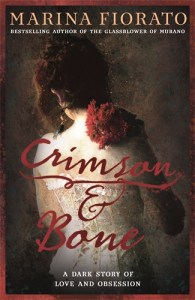 Crimson and Bone is a darkly gothic story of love and obsession set in Victorian London is steeped in the period, encompassing its glamorous high society as well as its dark underbelly.

Crimson and Bone by Marina Fiorato is published in Hardback, Ebook and Audio by Hodder & Stoughton in April 2017.

‘A fluid and engaging love story with a truly unique heroine’