The term “thriller” can definitely have negative connotations but there’s no doubt that we all love a good page-turner, and the best thrillers are just that: books that are impossible to put down until you reach the final page. Here we’ve pulled together a selection of our absolute must-read thrillers that we know you will love.

Before the Fall – Noah Hawley

A private jet plunges into the sea with on two survivors: the young son of the family who chartered the plane – now heir to a Fox-esque TV empire – and a man who was only on the plane by chance: down-on-his-luck artist Scott Burroughs, the hero show saved the boy’s life.

But nothing is simple is this post-truth world and Hawley skilfully pulls you through the layers of the mystery. Is Burroughs too good to be true?

He Said / She Said – Erin Kelly

He said it was consensual. She said nothing. But Laura knows what she saw… doesn’t she?

Twisting, gripping and topical, HE SAID/SHE SAID is the astonishing new suspense novel from the author of The Poison Tree – and comes loaded with rave reviews from authors, reviewers and early readers.

A SADISTIC KILLER IS ON THE LOOSE IN GLASGOW. Thomas Boag escaped from his first court appearance facing charges on a brutal murder. He’s suspected in the disappearances of two other people. Now he’s out for revenge.

Rosie Gilmour, crime reporter, helped put Boag behind bars. It was her investigation that provided enough evidence to arrest him. Now she’s watching her back.

The Special Girls by Isabelle Grey

They are called the ‘special girls’. How are they special and why were they chosen? Historical child sex abuse is linked to the murder of a young doctor in this gripping psychological thriller

A doctor is found beaten to death in woods close to a summer camp for young women with eating disorders. The camp is run by the charismatic Professor Chesham. DI Grace Fisher is called in, but is quickly pulled from the investigation – to head up a cold case inquiry involving Chesham himself.

Some years earlier, one of Chesham’s patients made allegations that he sexually assaulted her.

Close To Me – Amanda Reynolds (currently 99p in eBook too!)

‘Gripping, claustrophobic and often deeply unsettling, Close To Me exerts a magnetic pull from its first pages’ Kate Riordan, author of The Girl In The Photograph.

When Jo Harding falls down the stairs at home, she wakes up in hospital with partial amnesia – she’s lost a whole year of memories.

A lot can happen in a year. Was Jo having an affair? Lying to her family? Starting a new life?

She can’t remember what she did – or what happened the night she fell.

But she’s beginning to realise she might not be as good a wife and mother as she thought. 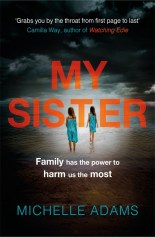 My Sister by Michelle Adams is an addictive, twisty, shocking debut thriller – an intimate tale of family  secrets that will grip readers who devoured Clare Mackintosh’s I Let You Go and S.K. Tremayne’s The Ice Twins

My name is Irini. I was given away.

My name is Elle. I was kept.

All her life Irini thought she was given away because her family didn’t want her. What if the truth is something worse?

One family bound by a harrowing secret.

While My Eyes Were Closed – Every Parent’s Nightmare