Aphrodite and the Duke is a vibrant historical romance, full of heart, heat, and thrilling period drama. A delectable treat for fans of Bridgerton!
MIMI MATTHEWS, USA TODAY bestselling author of THE SIREN OF SUSSEX
Full of lush gowns, longing looks and lingering secrets, Bridgerton lovers have found their next read in Aphrodite and the Duke. JJ McAvoy is a welcome new voice in historical romance
SARAH MACLEAN, NEW YORK TIMES bestselling author of A DUKE WORTH FALLING FOR
Dramatic and diverting second chance romance . . . readers will easily fall in love with the protagonists. And, between the Bridgerton TV series and the forthcoming film adaptation of Mr. Malcom's List, the popularity of diverse historical romance is clear; McAvoy's addition to this growing genre comes right on time
PUBLISHERS WEEKLY
An engrossing and original read celebrating strong women and the healing power of love
SCARLETT PECKHAM, USA TODAY bestselling author of THE DUKE I TEMPTED
Aphrodite and the Duke was a delightful read, full of surprises! From the start, I felt like I was a part of the dynamic DuBell family. Odite was such a complex, beautifully drawn heroine. There were so many feels, laugh-out-loud and tender moments. I loved it
AMALIE HOWARD, USA TODAY bestselling author of THE BEAST OF BESWICK
Aphrodite and the Duke is charming, witty, an utterly delightful read. It is fantastically pacy with a lovely heroine and a great Austenian villain. Perfect for all Bridgerton fans
PHOEBE WYNNE, author of THE RUINS
Fans of both Shonda Rhimes' TV adaptations and Julia Quinn's Bridgerton books will love this charming romance featuring the lively and heartwarming . . . Du Bell family and the world they inhabit
BOOKLIST
The characters . . . lend a verisimilitude that balances the enjoyable escape of McAvoy's Regency world of balls, gowns and romance
BOOKPAGE

Aphrodite and the Duke 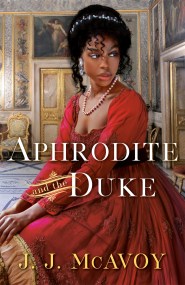