The nights are longer, it’s getting colder and let’s be honest – the news is all a little doom and gloom. So we’re here with our favourite bits of news from the past week to bring a little joy to your day.

Whenever I’m down I turn to the best animal Instagram account – @this_girl_is_a_squirrel. Jill was rescued from a hurricane and now delights thousands every day with her antics. I can’t get enough of watching her running around corridors, or fighting with her play carrot. Watching Jill makes me (temporarily) forget that there are bad things in this world.

So I was incredibly excited to discover that the tech company behind Pokemon Go are developing a Harry Potter augmented reality. What better way to escape the horrors of real life than to become a legitimate wizard?

Also I’ve been sucked into a black hole of ‘research’ on insta-famous hedgehogs, which is never a bad thing… 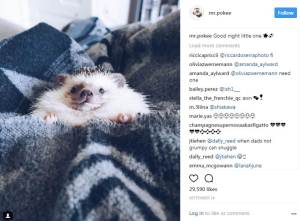 My favourite video of this week has to be James Corden’s “Thor Ragnarok in 4D”. Yes it’s desperately smug that he can get all the stars together; yes there’s nothing stars love better than proving what good sports they are…but you still find yourself laughing. Especially at Cate Blanchett, who is a goddess even with pipe cleaners sticking out of her head.

Another James Corden video for you – Carpool Karaoke with Sam Smith. That moment where Fifth Harmony appear is honestly one of my favourite Carpool Karaoke moments (Apart from when Adele rapped – she’s Queen)

Theatre that takes on the dating game …

As a woman in her 30s  – The Beginning by David Eldridge was a play that struck an awkward and very frightening chord. Two young professionals, the only singletons left at the party, get chatting at the end of the night (amongst the party debris of half drunk bottles of Prosecco, Scotch eggs and party streamers). One, a middle management tory-boy from Essex and the other, a high flying CEO at an advertising agency. Whilst nothing in common, we see them awkwardly  (and desperately) trying to find something to talk about, hoping it will lead to more. PAINFULLY awkward but PAINFULLY familiar. Even the set was familiar  – a Newgate clock hanging on the wall, some imitation Persian wall tiles behind the cooker, some 90s Fat Boy Slim and a fish finger sandwich to end the night – the scene of a middle class, middle of the road bourgeois house party in North London. We’ve all been there!