It began as genealogy research. I was focusing on my mom’s side of the family, and gathering any and all photos, vital records, and documents that would assist in my research. My mom gave me a small brown notebook that had belonged to her mother, my grandmother. “Your grandma was the family historian,” she’d said. My wide-eyed, confused page-turning of those little notebook pages became the character Charlotte’s wide-eyed, confused page-turning of those little notebook pages. My grandma’s little brown notebook became Vivian Dalton’s little brown notebook, and some of the notebook pages made their way into the novel.

As a young child I had adored my maternal grandmother. I remember her as warm, loving, comforting, and funny. She was wonderful with me and my sisters as children, but seemed to struggle to relate to us as we got older. This seemed particularly apparent regarding education. If one of us started talking about college subjects, or travel, or something else too far out of her comfort zone, she’d shift about and then bring the conversation back to something in her wheelhouse, like what was on sale at Buehler’s grocery store that week.

My mom had always said, “Your grandma doesn’t trust people who read books,” which made me laugh at first, because it seemed absurd. Who didn’t love books? We loved books. My sisters and I were all avid readers, as were my parents, and my dad’s parents. We were usually too busy eating all the cookies in the kitchen at my grandparents’ house to notice the lack of bookshelves in the other rooms. My aunt suspects my grandma may have been dyslexic, which would have made reading a great frustration. That possibility felt too heavy for me to tackle within this novel (not to mention the fact that I was already three-quarters of the way through writing the manuscript when I heard that theory) and I chose to imagine, instead, that my grandma just hadn’t had the opportunity to further her education.

I never knew that my grandma had worked as a telephone switchboard operator until after she died. I was so fascinated by this, and really wish I had known earlier because I would have wanted to hear so many stories about it! The more research I did, the more I discovered that it was a fairly common job for women during that time. A lot of people I’ve spoken to have said, “Oh, my grandmother was a switchboard operator too!” Unfortunately, my mom doesn’t remember anything terribly interesting about it, other than the fact that my grandma always eavesdropped on the conversations, and that she rarely had anything nice to say about anyone. I thought it would be interesting if she’d happened to overhear something about her own family. That part was fictional, although the secret she overheard was not.

The character of Vivian Dalton is very different from my grandmother, so much so that my mom read the book and said, “I don’t see any of my mother in her.” From my mom’s perspective, my grandma could be little angry and resentful. I never saw that in her, but I also didn’t know her very well.

Our time spent together tapered off as we got older. Later in my life, during the few visits we had, I could see her profound insecurities, which I think stemmed from the fact that she was undereducated and that she wasn’t wealthy, like the fancy “four-flushers” she was always complaining about. Her world, delineated by Wooster, Ohio, was very insular and small, and primarily dictated by how she perceived other people viewed her. In a way, I wanted my grandma to have a different, better story. I wanted her to learn and grow and triumph, as Vivian Dalton eventually does. And so, I wrote The Operator. 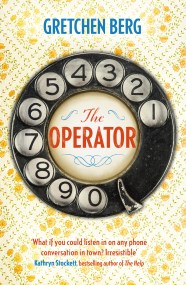 'What if you could listen in on any phone conversation in town? Irresistible!'
Kathryn Stockett, bestselling author of THE HELP

'Glorious, gossipy, delicious and perfect'
Jill Mansell, bestselling author of IT STARTED WITH A SECRET

It's 1952. The switchboard operators in Wooster, Ohio, love nothing more than to eavesdrop on their neighbours' conversations, and gossip about what they learn. Vivian Dalton is no different (despite her teenage daughter's disapproval), and always longs to hear something scandalous. But on the night of December 15th, she wishes she hadn't. The secret that's shared by a stranger on the line threatens to rip the rug of Vivian's life from under her.

Vivian may be mortified, but she's not going to take this lying down. She wants the truth, no matter how painful it may be. But one secret tends to lead to another . . .

This moving, heart-felt and ultimately uplifting novel brilliantly weaves together an irresistible portrayal of a town buzzing with scandal, and an unforgettable story of marriage, motherhood and the unbreakable ties of family.

'Funny, sweet, secretive, and full of fascinating 1930s, 40s, and 50s period details... a poignant look at life in a small town with its nosy neighbors, thorny families, imperfect romances, scandalous pasts, and gratifyingly just deserts' Laurie Frankel, bestselling author of THIS IS HOW IT ALWAYS IS